Effective yesterday, the Ministry of Health has lifted its restrictions on businesses that were ordered closed due to the “November 28 community incident”.

The loosening of restrictions comes with a set of dos and don’ts by the ministry that was approved by Prime Minister Hun Sen.

The Minister of Health Mam Bun Heng said all restaurants and shops can now operate as normal but must strictly adhere to the guidelines given by the ministry so as to protect their patrons from being victims of the COVID-19 virus.

Among the Standard Operating Procedures that must be followed are to make sure their premises are clean and hygienic at all times, their staff and customers must wear their facemasks, their temperatures are taken and there is social distancing.

Employees of Zando clothing shop in Boeng Keng Kang 1 commune opened its business while putting in place all the precautionary measures and safety guidelines given by the ministry.

Sotheavy Ruos, Zando’s marketing manager, said their staff underwent the COVID-19 test thrice, and only when the results all came back negative they were allowed to report for work.

“The staff were told to wear facemasks, gloves and were given instructions on what to do when customers come into the premises. If a customer comes in without a facemask, we give them one to wear. We will not allow anyone in who does not comply with the ministry ruling,” he said.

Ruos said they have also re-organised their store to comply with the ministry ruling so that those who come in can maintain their social distancing with other customers while they shop.

“We have also decided to disinfect our premise regularly as required by the ministry,” he said, adding that they hope their business will catch up again after the long closure and for that, they are offering a 50 percent discount for their goods as a way to attract customers.

Meanwhile, the Pedro shop in Boeng Keng Kang 1 commune is having a tough time resuming its business as many of their employees are not back to work. 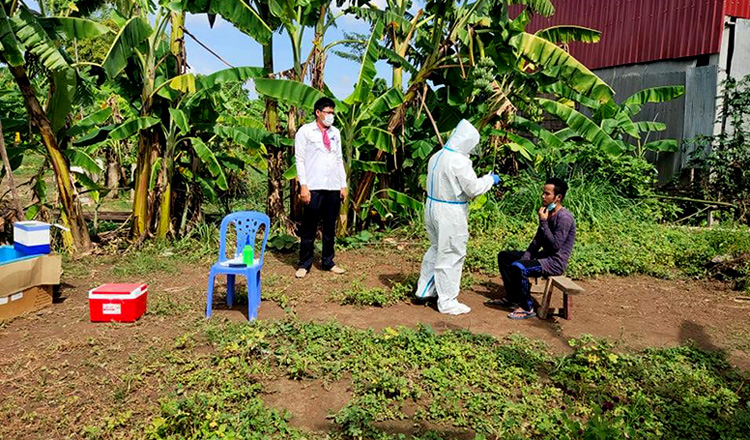 A Ministry of Health official checks on residents of Kandal province. Koh Santepheap

Champa Pich Hotel in Kratie province is back in business after one of its customers was found positive for COVID-19 on December 1. However, all the staff was tested negative. Mondulkiri’s Relax Hill Resort in Sen Monorom city also began operation on Christmas Eve.

“The November 28 community incident” started when the family of Lieutenant General Chhem Savuth, the Ministry of Interior’s director-general of the General Department of Prisons (GDP) was tested positive for the virus and had gone to different places.

Lieutenant General Nuth Savna, the department spokesman, told Khmer Times last week that all the personnel of the GDP is working at full capacity.

Meanwhile, two Cambodian migrant workers who had returned from Thailand in the wake of the country’s recent COVID-19 outbreak escaped from their quarantine centres last week.

Kong Meng Heng, 26, from Kandal’s Samaki village in Mukh Kampul district’s Prek Dambang commune was ordered by authorities to quarantine for 14 days when he crossed the Poipet International Border on December 23 but fled two days later.

However, the authorities in Kandal tracked him down and ordered that he be home-quarantined together with his mother and sister.

According to Ministry of Health spokeswoman Or Vandine: “The local authorities instructed him to not leave his  house as they will check on him daily.”

On December 25, she said, his samples and results from the Pasteur Institute showed negative for COVID-19 and the authorities will, however, do another COVID-19 test on the 13th day.

According to Keam Piseth, deputy director of Kandal provincial health department, Meng Heng has yet to be fined for skipping quarantine. Ministry of Health guidelines stipulate that those who escape quarantine can be charged and fined between $50 and $250.

Another migrant worker, 22-year-old Loeung Lysan who escaped from quarantine last Wednesday after entering Cambodia through the Poipet International Border is still at large.

Commenting on the VN Express report yesterday, Vandine denied a Vietnamese man who tested positive for COVID-19 had illegally crossed into Vietnam from Cambodia.

“We have had no such case reported to us by our Vietnamese counterparts and there is no record of the said individual crossing into Cambodia from Thailand or from Cambodia into Vietnam,” the ministry said.

Rattanak said the situation was under control but advised migrant workers in Thailand to stay put and follow the Thai Ministry of Health’s guidelines until the situation passed.

Oddar Meanchey provincial governor Pen Kosal likewise said the border with Thailand in his province is secure and estimated that between 110 and 150 migrant workers have been returning daily since the outbreak.

He said people showing symptoms are quarantined at the border, while those who are symptom-free are allowed to quarantine in their home provinces.

Kosal advised all returning migrant workers to follow ministry guidelines and voluntarily admit themselves into a 14-day quarantine.

Banteay Meanchey provincial governor Oum Reatrey could not be reached for comment.

Kampong Cham provincial governor Un Chanda said he has prepared quarantine centres in his province to help those who crossed the borders to be quarantined.

Chanda said 12 people were transported from the border on Friday and are being quarantined at the Mekong Hotel.

Meanwhile,  WHO representative to Cambodia Dr Li Ailan said Cambodia’s caseload has remained low and it was mainly due to the work carried out by the government, the community and global partners.

She said Cambodia was still at risk and while vaccines will help, they will not signal the end of the pandemic.

“Countries need to adopt a long-term mindset and approach. This includes being prepared to respond to new clusters with targeted, localised measures. This can help to minimise economic and social disruption while keeping the pandemic under control,” she said.

The Kingdom reported one new positive COVID-19 case over the weekend, a 43-year-old Indonesian man who arrived via Singapore on Friday. The country’s total cases stand at 364 with 356 recovered and no deaths.