“I also appeal to all people in the country to avoid Phnom Penh as the city is in a health crisis and as such it is advisable not to come to the city for any purpose other than emergency needs,” he added.

He also appealed for all wedding ceremonies to be cancelled and if this cannot be done for whatever reason to scale down seating.

His planned events of inaugurating the Hyatt Regency Hotel and also attend a ceremony the Ministry of Interior is also now in doubt.

This is in addition to 35 new cases, 31 of which were linked to the February 20 Community Incident, which had been reported earlier yesterday.

Meanwhile in efforts to stop the new community spread, the Health Ministry and Phnom Penh City Hall are scrambling to locate taxi, auto rickshaw and tuk-tuk drivers who may have come into contact with infected people and are asking them to come forward for testing at Olympic Stadium.

More than a dozen drivers had gone for testing on the first day at the stadium,which started at 2pm yesterday. The exact figures were not available at press time.

In its press release issued yesterday, the ministry appealed to those who had transported people on Friday to 23 hotspots linked to the community incident to also come forward for testing.

“In connection with the ‘February 20 Community Incident’, the ministry and Phnom Penh City Hall would like to appeal to taxi, auto richshaw or tuk tuk drivers who could have transported infected people at the 23 locations to have their samples taken for testing at the National Olympic Stadium,” it said.

In addition, the ministry yesterday listed 10 more locations related to the “February 20 Community Incident”. They are: Diamond Twin in Koh Pich, Junzun Karaoke in front of Phnom Penh International Airport, Coco Club and hotel in Chaktomuk commune, The World Shop at the back of Ratana Plazza market, One Mention shop at the back of Ratana Plazza market, 168 club near Olympic Stadium, Love restaurant in Boeng Raing commune, Hun Sen Phnom Penh Thmey high school in Phnom Penh Thmey commune and SIS International school near Doeumkor market.

Lang Tola, vice-president of the Indian Tricycle Association, told Khmer Times yesterday that he has led more than 27 members of his group to test for COVID-19 at Olympic Stadium, who had transported Chinese passengers to risk locations.

Most of those linked to the February 20 incident were Chinese nationals. 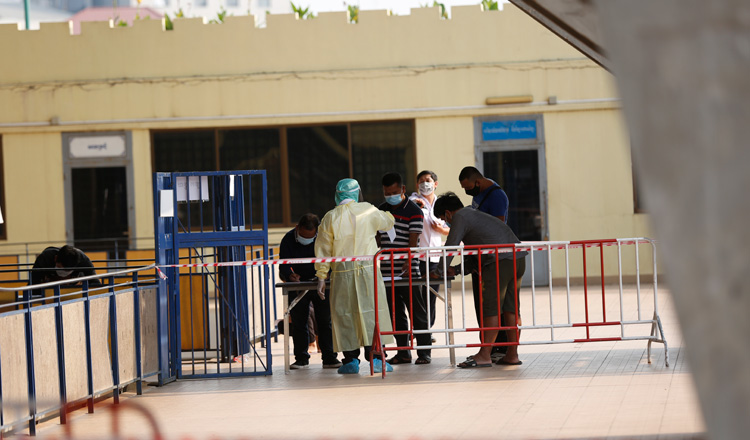 “I have some concerns over members who are tuk tuk drivers who are usually on standby for passengers in areas where the Ministry of Health has declared an outbreak of COVID-19 such as Prince Plaza Center and The World,” Tola said.

In yesterday’s press release, the Health Ministry also said that people who have been in and out of the at-risk locations or who suspect that they came into contact with someone with COVID-19 must be honest and voluntarily get tested.

It appealed to them to get tested at Chak Angre Health Center in Phnom Penh and go into home quarantine for 14 days.

In another development, the security guards at the Sokha Hotel, who allowed four Chinese women to abscond from quarantine, will be fined between $250 and $1,250 according to a government sub-decree without exception.

Phnom Penh governor Khuong Sreng told local media yesterday that the two security guards had been detained and put into quarantine for 14 days after having direct contact with a Chinese woman.

“We asked them to check whether they were sick or not. Once they are declared free from the virus, we will punish them for the offence according to the sub-decree,” he said.

Or Vandine, spokeswoman for the Ministry of Health, could not be reached for comment yesterday.

Earlier yesterday, the Health Ministry had reported 35 new visus cases, 31 of which were linked to the February 20 incident.

The other four were imported ones and there were two recoveries.

The community incident cases had jumped to 78 from 47 reported on Sunday.

Of the imported cases, one was a Cambodian man, 43, living in Phnom Penh, who flew in from Ghana via South Korea on February 8. He is now being treated at Chak Angre Health Center.

The other three cases were two Chinese men, aged 38 and 40, a Chinese woman, 29, who were in quarantine in a hotel in Phnom Penh. They had travelled from China on a direct flight to Cambodia on February 11.

The ministry had said in a statement thagt Cambodia’s tally was  568 cases with 475 recoveries and 93 still hospitalised.

It said among the recoveries were the two new ones, both Indians who flew in to Cambodia on February 3 from India via Singapore.

In a related development, Kandal provincial governor Kong Sophorn told local media yesterday that the Logic 2 restaurant, which was involved in the “February 20 Community Incident”, had temporarily suspended its business.

Sophorn also said that on Sunday, 76 people working at the Logic 2 restaurant had the samples taken for testing and are being quarantined at Prek Tapov School, Doeum Mean commune, Takhmao City.