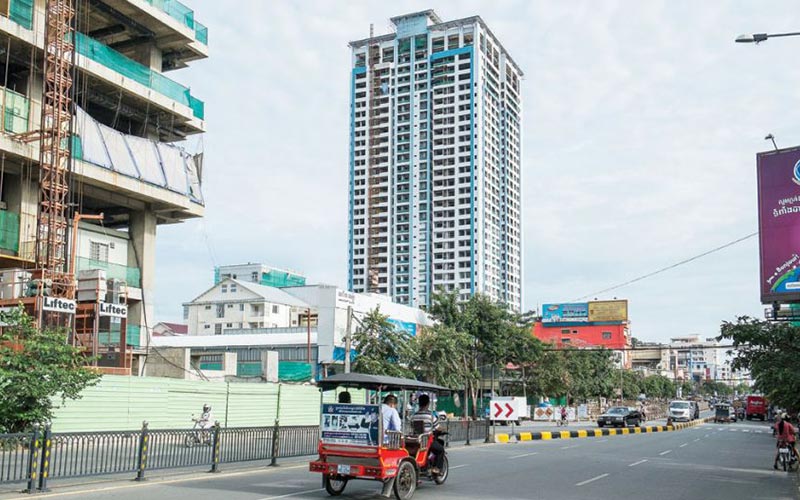 According to the General Population Census 2019, Phnom Penh is home to over 2 million residents, that’s about 3,136 people per square kilometre. As the city is the most populated urban centre in the country, and houses the seat of government, it remains the centre of foreign investment in the Kingdom. The Realestate.com.kh Consumer Sentiment Survey 2019 showed that 54% of respondents said that location was the defining factor inﬂuencing their property purchase. At the same time, 76% of property buyers said Phnom Penh was where they were looking to buy property; suburban areas like Toul Kork, Chamkarmon, and Sen Sok topping the preference list.

Phnom Penh now offers everything one would expect from a metropolitan city. Its shopping centres, malls, skyscrapers, hotels as well as eateries and entertainment options help to draw tourists from around the world and give expatriates a taste of home.

The whole of Phnom Penh’s economic activity encompasses an array of industries, from garment, agricultural processing, to multiple forms of goods trading. In recent years, Phnom Penh’s financial sector has seen plenty of growth especially with the establishment of the Cambodia Stock Exchange (CSX) in 2012. The CSX set a new record of $151 million raised from securities and corporate bond trading in 2019. This is a 26% increase from last year’s $120 million raised.

Siem Reap temples come to mind whenever tourism in Cambodia is talked about. But as of Q3 2019, Phnom Penh has overtaken Siem Reap in terms of tourists arrivals, according to data from the Ministry of Tourism. Over 1.5 million people have landed in Phnom Penh’s international airport in the first 9 months of 2019.

The government expects that the volume of tourists arriving in Phnom Penh per year would more than double by 2030, hence, the construction of the new international Phnom Penh airport in Kandal province operational in 4-5 years time.

Real estate in Phnom Penh’s city centre boasts the highest dollar per square metre in the country while still being attractive to foreign investors. For Cambodia’s growing retail sector, retail spaces range from $18 per sqm up to $40 per sqm depending on its location.

The capital’s retail property market is undergoing vast changes. International brands are joining the local market faster than ever. While some brands aim to capture the country’s middle class, many are targeting expatriates or upper-class locals. Meanwhile, homegrown operations are expanding by leaps and bounds.

Most notable is the influx of high quality shopping options in the Kingdom’s capital. Japan’s AEON Mall was the ﬁrst shopping centre of its kind when it opened its doors in the summer of 2014. It has proven successful and is often packed full of shoppers who travel from rural provinces on the weekend. A second location of AEON Mall was opened in 2018 and a third AEON mall was announced to be completed in the south of Phnom Penh in 2023.

Retail spaces will be seeing continuous and massive growth in the immediate future (3 to 4 years) as more shopping centres and malls begin opening their doors. According to Knight Frank, the current supply of retail space number at 338,505 sqm net leasable area as of H1 2019. This is expected to increase to a little over 1 million sqm of net leasable area by 2021 as both local and international developers expand their businesses in Phnom Penh.

Condominium projects in Phnom Penh will similarly continue to be built as foreign demand and the appeal of living within the city centres increases in appeal among local buyers. Current total supply of condominium units number a little over 17,000 units which is expected to triple to over 52,000 units by the end of 2022. Much of these projected condominiums are targeting local buyers by pricing themselves in mid-tier ranges ($75,000 to $125,000) since solely relying on foreign demand, despite their influx, is not a sustainable strategy.

Realestate.com.kh projects 2019 could be another breakthrough year for borey developers. According to data from Knight Frank, the current supply of housing units amounted to 51,278 in the first half of 2019 alone. At the same time, 18 new borey projects were launched all around Phnom Penh, which is projected to add another 22,549 units ready to be handed over by the end of 2022.

As most (59%) of these units are classified as mid-tier, a wide range of the homebuyer market would be interested in purchasing this type of landed property. The Consumer Sentiment Survey 2019 data also shows that almost a third of over 2,000 respondents indicated they are interested in a borey house.

The areas of Sen Sok, Russey Keo and Kamboul are where most of the borey developments are in Phnom Penh. These are followed by the districts of Dang Kao, Mean Chey, Chbar Ampov, and Chroy Changvar.

The Chroy Changvar district, across the Tonle Sap river from Phnom Penh’s center, proves to be an area to watch on its own in the coming years. The Overseas Cambodia Investment Corporation (OCIC) is developing Chroy Changvar into a satellite city complete with the comforts of downtown Phnom Penh - without having to go through the city’s increasingly congested rush hour traffic.

As a result, a wealth of new developments have popped up on the strength of increasing demand from both local and international investors. According to the Consumer Sentiment Survey 2019, most buyers (55%) value location as the main criteria for a property purchase. It could very well be assumed that local residents have been considering the growing traffic problem as a motivation to purchase property.

Office space property is growing considerably within Phnom Penh. The office space supply has grown to 463,701 sqm NLA with the addition of 3 Grade B office buildings in H1 2019 according to Knight Frank. Office spaces are expected to continue to grow with an expected 75% increase in Grade A office stock within the capital by 2022. But as things stand, Grade B and C office complexes remain the most popular choices for businesses in Cambodia.

The entry of strata-titled offices is an intriguing new area of investment. According to Knight Frank, yield-drive investors may be attracted to stratified office investments as the condominium markets hit equilibrium. As mentioned in the previous sections of this guide, strata titled office spaces are still new to the market and its wider market acceptance is yet to be determined.

The growth of Phnom Penh’s increasingly diverse property market is only set to continue in the future, especially when the government is encouraging its local markets to open up. Not to mention, investors from China are continuously pouring into the country, many developers have launched projects to house the growing segment of middle class workers - a market where developers and investors should be looking at for sustainable and long-term returns.